Imagine that you are the product owner of an application with around one million users (or devices) generating some 20,000 events per second. You then need to calculate the total number of concurrent users. In real time…

The challenges of Big Data are still formidable and we will talk about them once more at the Big Data Spain conference. Did you know, for example, that, in a few months time, European authorities will be able to impose sanctions of up to 20 million euros to your company? Think Big… And Then Think Bigger!

Big Data Spain 2017 will take place this year on November 15, 16 and 17 in Madrid and it will be, once more, the event with the highest quality content in the calendar. We will count with top of the line international speakers who are part of leading companies, such as Uber, Facebook, LinkedIn and O’Reilly and behemoths embarked in their digital transformation like Procter & Gamble.

Which experts and companies will gather in Big Data Spain?

Half of the participants are coming from the software and IT sectors. Banking, telecommunications, consultancy, education, and media are the other industries will be well represented too. 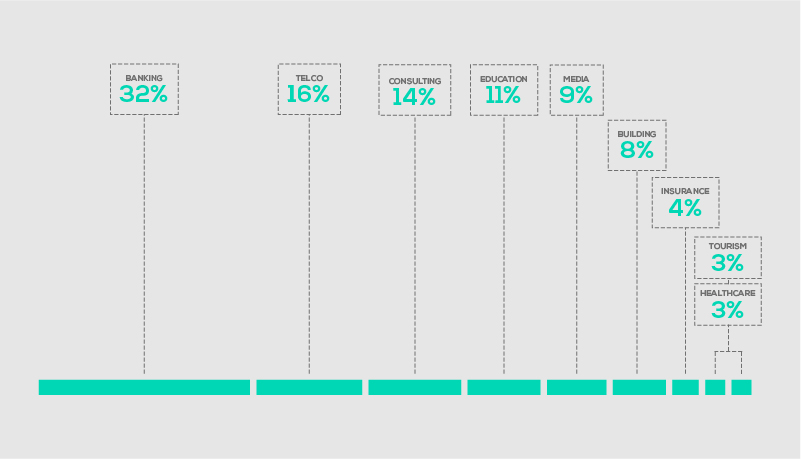 The companies with the most representatives in Big Data Spain mirror the composition of the IBEX 35 (main stock reference index in the Spanish stock market). Not publicly-floating companies giants such as AXA, El Corte Inglés, Mutua, Real Madrid, Vodafone, ADIF, are also well represented at the event.

The profiles of the attendees are hardly a surprise: C-level executives, developers, business managers, Big Data architects, data scientists and analysts make over half of those present in the conference. 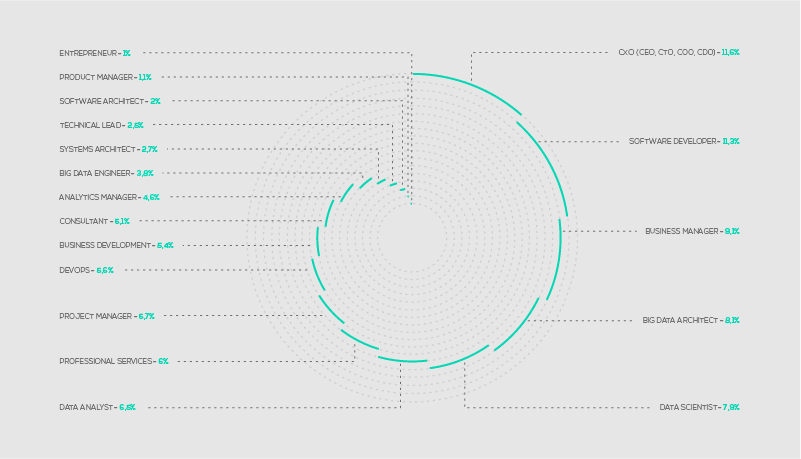 We are missing a higher proportion of entrepreneurs because start-ups are well represented. Perhaps only founders declare themselves with the job title “entrepreneur”. The appeal of Big Data Spain is a no-brainer for international VCs and insiders.

Attendees from the past edition declared their areas of interest fields on our surveys and, also, via an interaction on-premise, Wisdom of Crowds, visualizing the “votes” per area, in decreasing order: 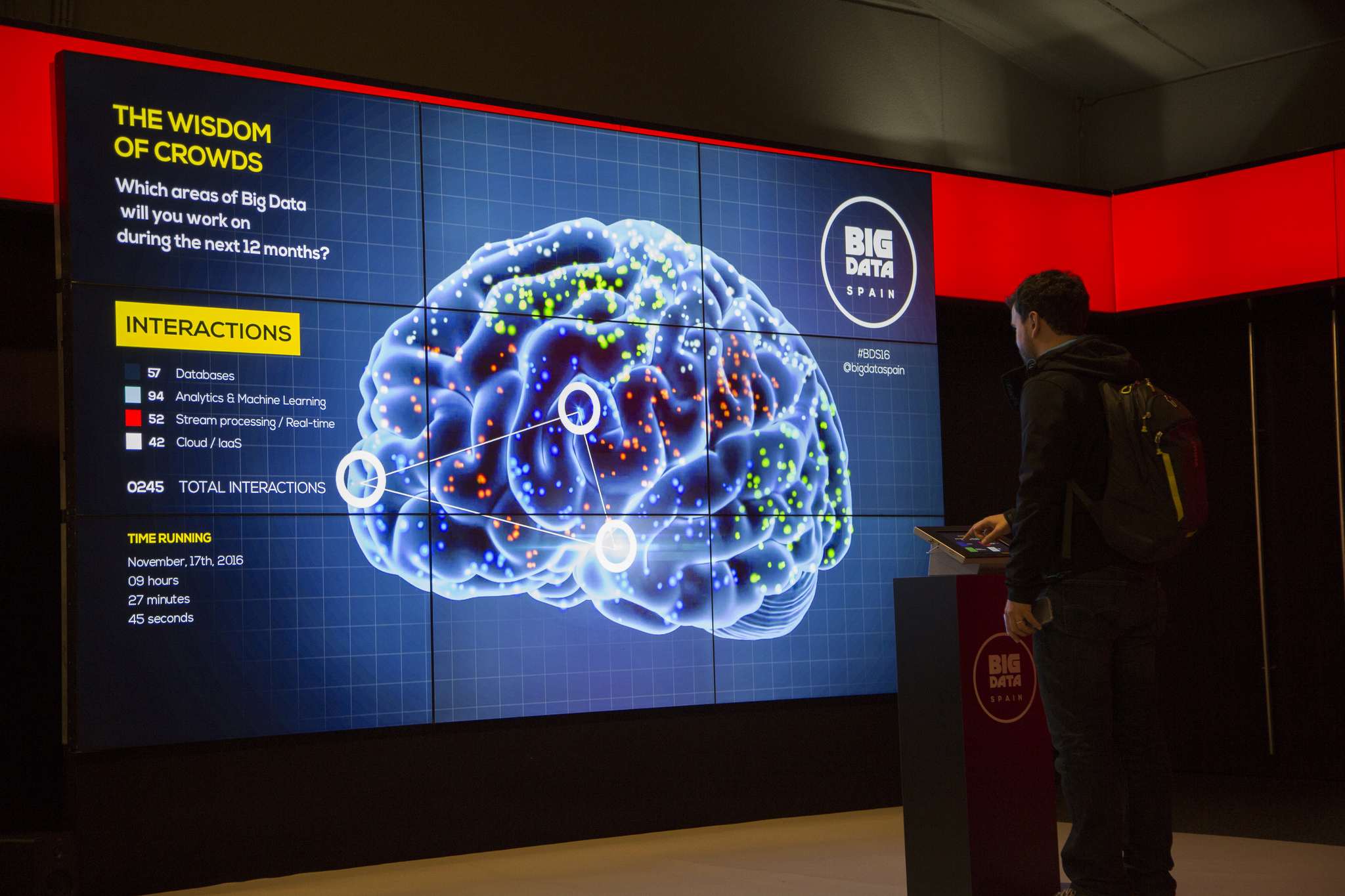 In this edition, we will talk about:

From May 18, 2018 General Data Protection Regulation (GDPR) EU 2016/679 will be able to impose sanctions of up to 20 million euros to your company; for that reason, we will talk about data Governance in Big Data Spain.

Big Data Spain has become a zeitgeist of disruptive technologies.

The transformative power of Big Data is only comparable to that of Artificial Intelligence (AI). Both are complementary technologies in many use cases. Who in Silicon Valley claimed that throwing AI algorithms to virtually any business process can be the basis of a start-up?

There is nothing (up to this moment) that makes us think that it is not so; if the buzzword Big Data is included in the description of 5,600 start-ups in the database of Crunchbase, Artificial Intelligence is appearing already in 5,200 companies (1% of the total number of start-ups in the database). In comparison, the other hype terms, Blockchain and/or Bitcoin, only appear in the description of 1,700 start-ups.

Admittedly, the applications that make use of Artificial Intelligence have been in development in the academic field many decades before the most recent technologies of Big Data or blockchain and cryptocurrencies. 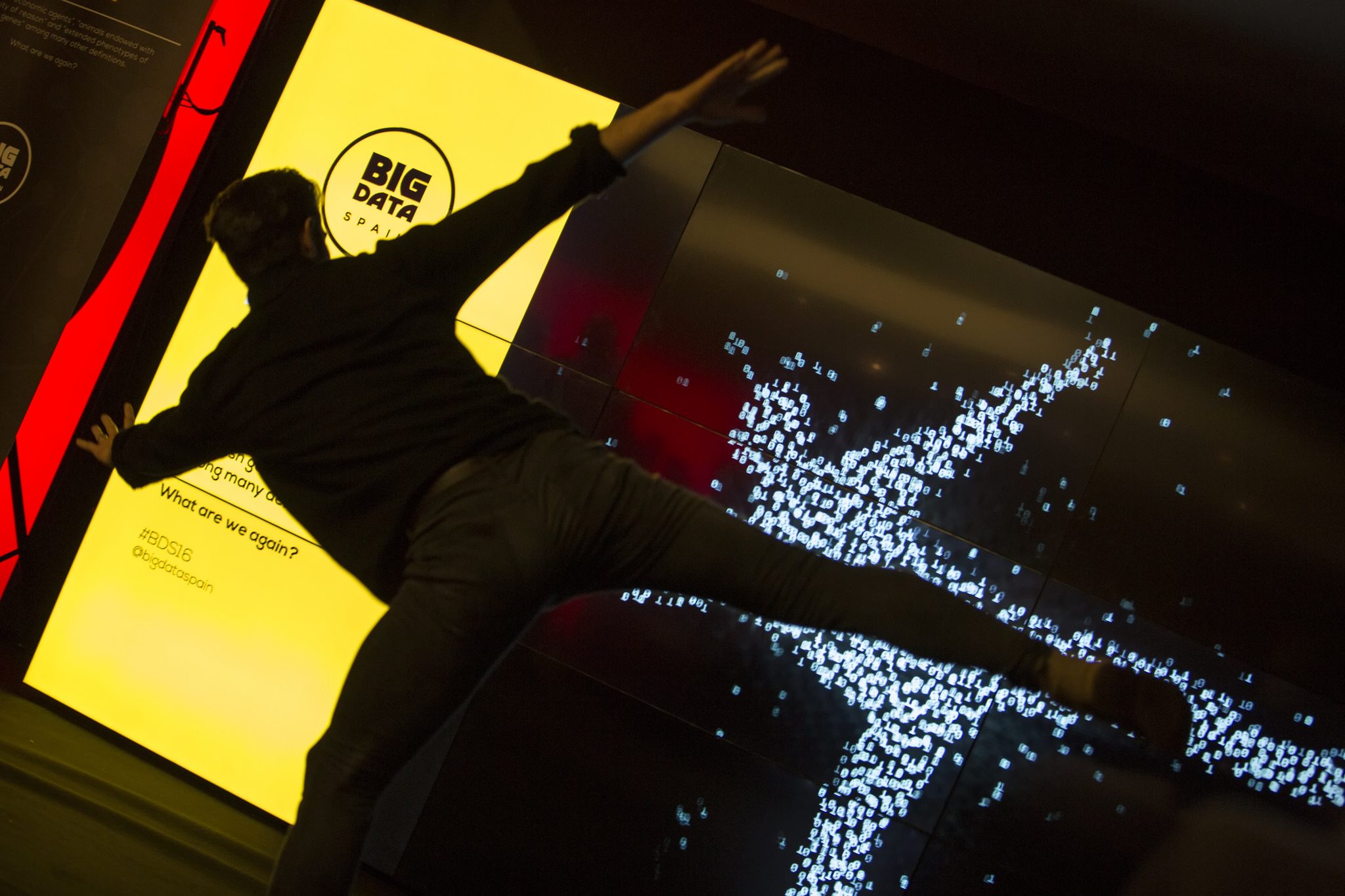 Attendee at Big Data Spain 2016 interacting with the “Binary” station, which visualises human silhouettes as a combination of zeros and ones

AI is already part of our daily lives. We use the recommendation engine of advanced ecommerce websites and we pay with a system that decides our probabilities of committing fraud, all of this in real-time.

AI can diagnose problems with the retina to prevent blindness over time. And Artificial Intelligence could save us from an extinction like the one that affected dinosaurs: at Big Data Spain 2016, we learned how to predict and classify Near Earth Objects in order to detect asteroids that could crash in our planet.

Curating Big Data Spain consists in been always on the lookout for visionaries, builders and makers who shape the future of data-driven applications. Big Data Spain is in fact a large-scale experiment. In the first edition of 2012 we asked ourselves if we could aim at lining up top speakers in a sustainable and cost-effective way. We then defined the formula for a massive successful technology event that we still apply. 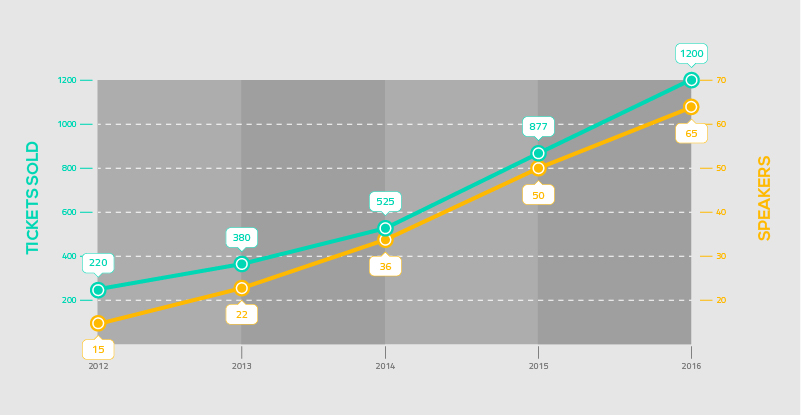 A few years later we can confirm that the experiment is working: the curation drives the commercial success of the event, both in terms of sponsorship and in the box-office.

It is quality rather than quantity that matters, Séneca

We thank Stratio as our Fidelity Sponsor (in this edition as Platinum) for trusting us in the last few editions. Some of the sponsors among the ones in 2017 are also recurring supporters: Mathworks, DXC technology, Elastic (Silver Plus), ARSYS, BI Geek, Couchbase, ESADE, KSchool, MongoDB, NETAPP, RedHat, SV Group, Talend, Treelogic (Silver), LeanXcale and IIC Instituto de Ingeniería del Conocimiento (Bronze). The showroom at Kinépolis Pozuelo will be busy indeed. 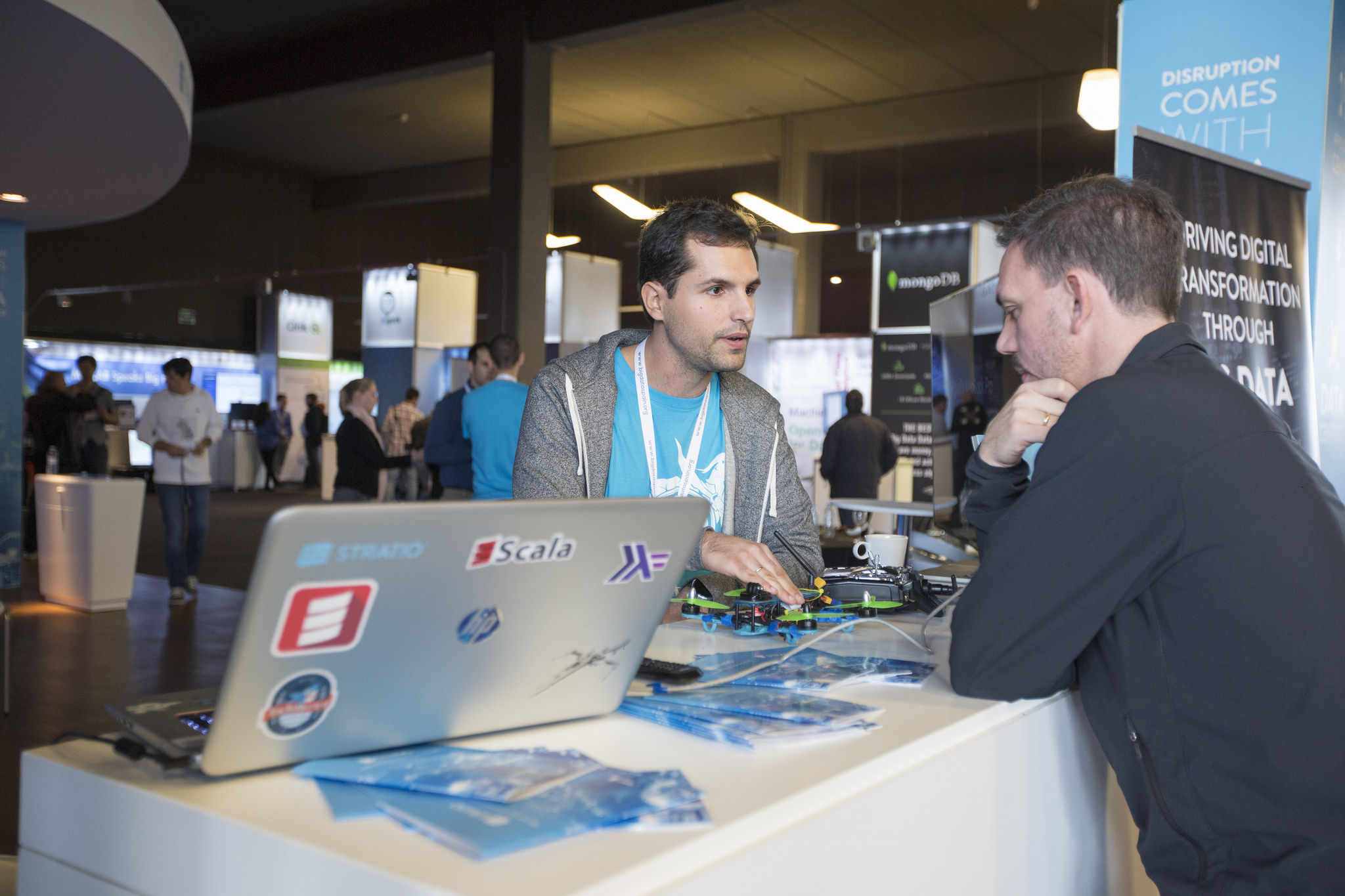 Big Data Spain is growing with more and larger sponsors than ever but the capacity of the conference is limited by the 1.5 days of the event. We scheduled a maximum of 4 simultaneous tracks so that participants do not lose many simultaneous talks. For this reason, we only have space for 40 sessions and 60 speakers.

A macro-project like Big Data Spain is a challenge that requires the dedication, the commitment and the enthusiasm of many people. It is an honour and a privilege to work “12 months a year” with Marta Alfonso, Maribel Tirados, Lidia Fernández, David Mota, Ernesto Alonso and many other colleagues at Paradigma Digital who organize the event.

Business attendees enjoy the networking of the event: Big Data Spain is typically the highlight of Q4; leads get a fresh impulse before and during the conference and new contacts pile up to meet in the weeks immediately after the event. Intensity is a great bonus of Big Data Spain.

The high density of sessions in the schedule is however a challenge for attendees with a technical profile. Some will miss talks in different rooms at the same time and that the 40-minute format is too short to thoroughly touch complex topics.

In reality, we all miss practical courses and “looking at lines of code”. One change in this edition is that, in order to meet this necessity, we have yet again associated with the best: Chris Fregly, Paco Nathan and other partners who will give intensive advanced 4 hour courses to developers, architects and data analysists with these topics:

The training will take place in only one session before the conference. The siting capacity is very limited, only 25-30 participants per course, once more, in order to preserve its quality and to adequately size the number of necessary instructors. Registered participants will be able to choose a course in the morning, one in the afternoon or both until completing the capacity.

What can you contribute with?

We just opened the ticket office and you can buy your tickets for courses and/or conferences if you want to participate. If you have a good message to contribute as a speaker, the Call for Papers of Big Data Spain is still open until September 12.

Finally, if you want to sponsor Big Data Spain 2017 you can still do it on September; just contact us at sponsors@bigdataspain.org and we will help you.

We will see you soon either way.

MBA with more than fourteen years of experience in Paris and London, today he is a part of Paradigma in the areas of digital marketing and analytics. Ruben has the good fortune to head the team organising Big Data Spain conference, one of the most important analytics events in Europe, Cloud, and Artificial Intelligence

From fiction to reality: the maturity path of Artificial Int...